Year-in-review articles generally seem to exist for one of three reasons: a) to highlight great content generated throughout the year, such as this one from Fedora Magazine; b) to fill space on a “no news” day, for example most everything produced by your favorite journalism site; or c) to force a writer to reflect on their writing and their year, for example this post. My goal is to reflect on my goals and what I wrote in order to figure out how to do it all better next year.

You Only Had One Job (per week)

This year I set a goal of trying to write at least once per week, every week1. My hope was that in between writing weekly status reports for my public facing role as the Fedora Community Action and Impact Coordinator I would also write some articles on various conferences I attended, technology of interest, deeper looks at projects, and opinion pieces. How’d I do?

The following graph shows my posts per month per year for 2015-2017. Because I didn’t write a review article for 2015 or 2016 I am including the entire history of my blog in this analysis. 2016 was my first full year trying to write more publicly as I only started maintaining a blog site in mid-2015. When those years came to an end, I didn’t think about reviewing. 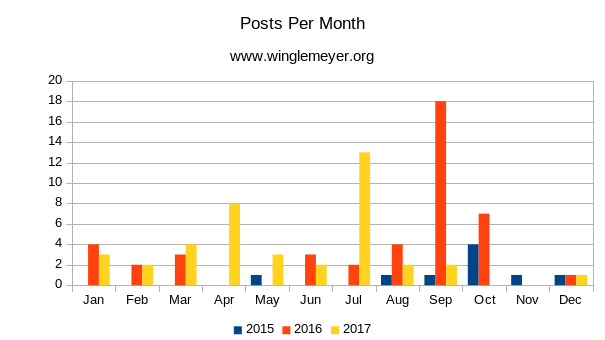 Looking at this graph, a few things immediately stuck out:

I knew I hadn’t hit my goal of 52 weeks of posts this year. I wasn’t sure, but I assumed I hadn’t even written 52 posts this year. Unfortunately I was right on both counts. Even worse, it appears my volume of writing went down in 2017, although a lot of that is attributable to not having written all of my trip reports or done any writing about Write The Docs talks. Specifically:

This year I also instrumented my site with Google Analytics. I have no real use for the data and the stats look exactly like what you’d expect a poorly maintained personal blog to look like. But, I did discover that my two highest visited articles are my 2016 gem about cell phone obsolescence and my 2017 opus about avoiding double taxation.

What Did I Write About

I started a series of articles in March called “Slice of Cake.” The pun, related to my pronunciation of FCAIC (Fedora Community Action and Impact Coordinator) as “F-Cake”, may be bad, but the goal is good. With the support of my boss, Stormy Peters I write about what I’ve been working on for Fedora, possibly some of what I am focusing for next week, occasional bits of personal life, and my upcoming travel schedule. I managed to write 20 of these, the last in late September.

If you do the math, there were 29 weeks between the first one and the last one. I originally targeted publishing a new slice every Monday. However, I quickly realized that when I travel the world is already turned upside down and publishing that week is hard. This is doubly true if the update would basically be “travel.” I stopped in late September while doing preparation for my then upcoming two-and-half week vacation at the beginning of October. When I got back things were crazy busy and, much like an weight-loss goal2, this writing got dropped.

I traveled a lot in 2017. I’ve been too scared to actually figure out my entire travel schedule for the year. But, in the spirit of reflection, I figured it out and created a pdf calendar using Dave Seah’s great compact calendar. In list form, I attended several events for Fedora/Red Hat:

Writing a meta-summary of these events feels out of scope for this article. But, what I do notice is that I was doing great on reports until Flock. Flock was the big trip I had before my long vacation. Preparing for several weeks away from the office with no real access to email took so much time I never got trip reports written. Once I fell behind, I never caught back up. I’ll write more about these travels in a future blog post. Ideally, I’ll catch up on the later trip reports!

In the context of my public work in Fedora, I set a goal of writing a quarterly summary of what is going on for the FCAIC role in Fedora Magazine. I wrote the first one in October 2016 when I started the job. I followed up successfully in January 2017 and April 2017. The followup in July 2017 never happened. I am not sure this is a huge loss. Now that I am doing weekly reports (with some caveats) this may be more of a repeat than new information.

I wrote two posts as part of an opensource.com blogging challenge. It was fun to do and made me think, but it was also a lot of work. I encourage everyone to consider participating in one of these. I strongly encourage you to start small, as in “do only every other week” not “every week” in order to rack up some success. It is hard, but sharing your knowledge and organizing your thoughts on a topic are well worth the effort.

I also wrote five other pieces. They included a bad cover/rewrite of a song about packaging a piece of software and two other quasi-tech pieces about ERP and password management. They were personal motivated, such a piece I wrote a few days ago about saving our history and deeply off-topic but important to me such as this piece about international taxation.

What About Next Year

In general I want to change some of the ways that I work in 2018. Along with those changes needs to be a change in how I prioritize writing. A huge part of my job is communication. In a project like Fedora you need to “over communicate” to ensure everyone gets a message. I need to model that by continuing to write about my thoughts so they become projects people can help me with instead of projects I never get done.

I have a repeating calendar entry to remind me to post my “slice of cake.” That needs to be made non-optional in my life. I am not sure how I will do it, but I’ll try some new things. For now, my first try is going to be moving it to Fridays with a “post” reminder on Monday.